In 1998 Gary and I lived near Lake McCumber near Lassen National Park in Northern California. A short time after we moved there, we decided to get a cat. We brought home a male gray tabby kitten and named him Binky. He was a feisty and gregarious cat. Since we both worked outside the home, a month or so later we decided to get a female cat to keep Binky company while we were at work. That's how our cat, Betty, came to join us. Binky and Betty would play outside during the day and we would bring them in the house at night to protect them from predators like owl and fox. They played and hunted squirrels and chipmunks together and had a grand old time.

One day when we got home we called Binky and Betty like we usually did and Betty came running, but no Binky. We walked all around the area and Binky was no where to be found. Then we got in our car and drove around the neighborhood with the windows rolled down calling and calling for Binky, still no Binky. Finally it was dark and we still hadn't found Binky. The next morning I ran outside first thing to see if Binky was there and he still was no where to be found. A few days went by and still there was no sign of Binky. We asked all the neighbors and no one had seen Binky. We put notices up saying lost cat with our phone number, but no one called us to say they had seen our cat.

A few days later it started to snow. It was the middle of October and once it started to snow it didn't stop and didn't melt at the 4500 foot elevation where we lived till the next Spring. It kept snowing and snowing and a couple of weeks went by and still no Binky. Every day when I would drive to work, I would drive through the neighborhood with my windows down calling Binky. But I never saw Binky. By that time I had all but given up hope of ever finding Binky. I figured Binky couldn't find his way back home with all the snow on the ground.

A month passed and we had resigned ourselves that we wouldn't find Binky. We figured Binky had been eaten by a fox or an owl. By that time the snow was about a foot deep and it was cold especially at night. One weekend we decided to go to the Ponderosa Pines restaurant just down the road from us for breakfast. After we'd finished most of our breakfast we began reading the Redding newspaper left there by another patron. As I glanced through the paper I saw an animal shelter ad telling of a cat for adoption. I exclaimed loudly, "It's Binky, it's Binky!" Everyone in the restaurant looked up. Gary grabbed the newspaper to look for himself. The ad was in black and white but it did look like Binky.

We read in the paper the shelter closed at noon on Saturday and it was already late. I said to Gary, "Quick, lets leave right now and drive down there before they close". Gary said he didn't think we'd make it in time, but we could try. It was 45 miles to Redding from where we were down the mountain. Gary said, "Can I finish my breakfast?". I said, "No, this is important, lets leave now". We drove as fast as we could down the mountain to the shelter.

Once we got to the shelter we had to register to see the animals up for adoption before we could go in, we could hardly contain ourselves. Finally we ran up to the cage where the cat was and called, "Binky, Binky". The cat looked almost like Binky, down to the same coloring and everything, but the cat just blinked at us and it wasn't Binky. For a moment I was almost fooled thinking it was Binky. It could have been Binky's brother, but it wasn't Binky. We were so disappointed. We went out to our car and I cried a little since I had gotten my hopes up.

I told Gary I felt like Binky was still alive out there. Gary said I was just being foolish and putting myself through needless suffering looking for Binky. But I just couldn't give up hope for some reason. I talked Gary into going to the local Kinko's print shop while we were in Redding. I had the newspaper clipping of the cat enlarged and printed on posters. We didn't have a camera at the time and so we had no photos of Binky. We had ten posters printed up with the enlargement of the cat from the newspaper and wrote a message below about Binky being lost with our phone number. Then we had the posters laminated since it was wet and snowy. We drove back up to the mountains and hung the posters all over the neighborhood and we waited.

At the time Gary worked from 7 am to 3:30 p.m. and I worked from 2 p.m. to 10 p.m. so we only saw each other on weekends. Two weeks went by and one evening I was at work and the phone rang and Gary said he had found Binky. Gary said a woman named Shannon had called and said "I saw your cat Binky sitting on a tree stump in the woods but when I called him he ran away". She said, "I know it was your cat because he looked just like the cat on the poster". She said, "Hurry, because I had to drive to my home before I could call you and I live seven miles from the lake where I saw him". Gary said he ran out of the house and drove like crazy to where Shannon had seen the cat. Gary said he walked into the woods and saw Binky sitting up on the same tree stump. Gary said he called, "Binky" and Binky came running to him.

I left work early that day to go home and see Binky. When I got home I picked up Binky and he was skin and bones. Binky had lost almost half of his body weight. His nose and feet were frost bitten and he could hardly walk. He also seemed like he could barely see, possibly from snow blindness. I slept with Binky on the couch that night and carried him to his food and his litter box and back to the couch again. Binky smelled like fabric softener. I figured he had stayed outside someones dryer vent to keep warm. 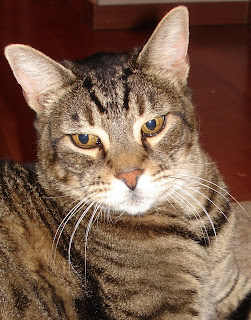 The next day I called the vet to ask what I could do for Binky. The vet said he might have major organ damage from starvation and all I could do was feed him and give him lots of water and hope his kidneys and other organs were OK. Then we realized we had no way of thanking Shannon, the woman who had called us to tell us where Binky was. Gary had rushed out the house so quickly he didn't get her phone number. All we knew was that she parked near the lake and hiked around the lake each day. 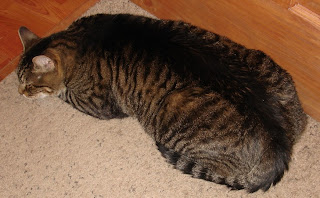 Later that summer I was driving to work late one morning and I saw a woman walking along the road alone. I pulled up alongside her and rolled down my window and said, "Are you Shannon?" She said, "Why" looking rather suspiciously at me. Somehow I knew she was Shannon and I said, "Because you called us and told us about our cat Binky and I want to thank you so very much". Shannon exclaimed, "Oh I am so happy, I never knew if you got your cat back or not because he ran away from me and I had to drive seven miles to my home before I could call you." I told Shannon how Gary had driven to the exact spot she had described and how Binky was again sitting on the stump and ran up to Gary when he called him. I also told Shannon she had saved Binky's life because he was almost dead.

Shannon relayed how she had called several folks up in the mountains about their lost dogs and always wondered whether they had gotten them back. I said I was so thankful to her for calling because a lot of folks don't take the time, especially for cats, thinking they are stray or can fend for themselves. Shannon said, "I am so happy you got your cat back; I just knew it was your cat because he looked just like his photo on the poster". I said, "Yes he does, doesn't he!" 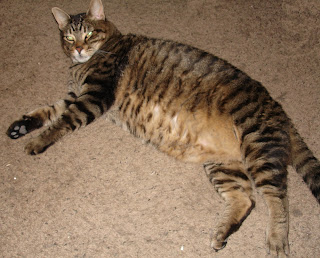 While we lived at Lake McCumber every time we drove by the place where Gary found Binky, we would always say to each other, "There's Binky's stump!" I've kept the newspaper clipping of the cat in my wallet all this time. It's been about ten years since Binky was lost. As you can see Binky isn't starving any longer, he made up for lost time in that regard. To this day Binky is scared of loud noises and runs if you pick up anything like a broom or package, but he is the sweetest cat you could ever know. We've moved a couple of times since then, but one time a few years ago Gary and I made a trip up to Lake McCumber and as we drove by the area Gary pointed out Binky's stump to me again.
Posted by Linda Starr at 3:30 AM