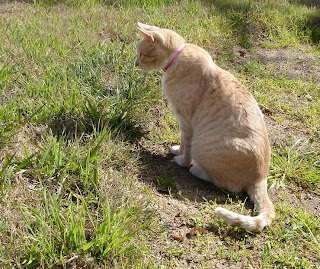 Yellow Tabby as found with
pink and white flea collar
One day three years ago this month, I was weeding in the perennial border in the very early morning. The weather here is extremely hot and dry, so morning is the only time it's bearable to do any type of physical labor even in the month of September. At the back of the border were three marguerites, Argyranthemum frutescens, growing which were very large and dense, thick shrubs really. While I was weeding I heard a cat meow. I was rather startled since, at the time, both my cats, Binky and Betty, were indoor cats. I looked around and couldn't see a cat. Then I heard another meow. For some reason I couldn't quite isolate where the meow was coming from, it seemed to echo all around me.

Finally I located the meow coming from under one of the marguerites. I saw a huge, yellow tabby cat crouched there looking up at me. I could see in his eyes and his stance he was ready to run at any moment. I could tell he was waiting for me to show a sign whether I was friendly or whether I would chase him away. I spoke softly to him saying, "Good kitty, good kitty" over and over, at the same time I slowly squatted down so I would appear less threatening to the cat. Eventually the yellow tabby crept out and came up to me. I pet him for a while and then went back to my weeding.

After I finished weeding the cat followed me out to the patio. It was then that I got a good look at how tall the yellow tabby was. I also noticed the cat was quite skinny and his fur was dry and rough. The last thing we needed was another cat, but I thought I would bring some cat food outside by the patio and give him a little since he was so thin. I also noticed he was wearing a pink and white flea collar so I thought he must belong to someone in the neighborhood. I reasoned if I fed him by the patio, he wouldn't associate our house with food and he would return home, or, I would have time to locate his owner. 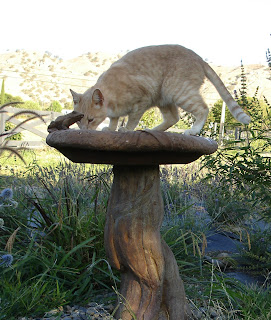 Yellow Tabby drinking from birdbath
Weeks went by and the yellow tabby was still there every morning, so, of course, I fed him each day. I asked around and no one had lost a cat and we didn't see any notices on the bulletin board in our little town about any lost cat. By this time both Gary and I had grown quite fond of the cat. I soon found out the cat felt the same way about us. If I walked somewhere on the property and the cat couldn't see me, I would hear him let out the loudest and most forlorn cry I think I have every heard from an animal. Meooooow, meoooow, meoooow, over and over and over again he would cry. Then I would call him, "Here kitty, kitty", and he would come running up to me from way across the property. He just couldn't stand to leave my side. I mentioned this to Gary and Gary said the cat would follow him every where he went too. If Gary went down to the barn, the next thing he knew the cat would come down there. So I said to Gary to be sure and call to the cat if he started to cry out with that forlorn meow like he did.

As winter drew near I decided to bring the yellow tabby in at night since it was getting really cold out. I also didn't want to risk him to a coyote, owl or bobcat. I wondered how the cat would get along with our other two cats, especially Binky. If you read the story about Binky's Stump you know that Binky is quite skittish and fearful, so I worried about that. The evening I brought the yellow tabby in and an amazing thing happened. Binky and the yellow tabby loved one another instantly. It was as if the new cat brought Binky out of his shell. Previously, Binky used to hide under the bed most of the time. Then when the yellow tabby came indoors, the two of them slept together, they groomed each other, they played together, and they got along famously. The yellow tabby and Betty, our other cat, didn't get along as well. Betty is very feisty and independent, so I knew Betty could take care of herself and would be OK. 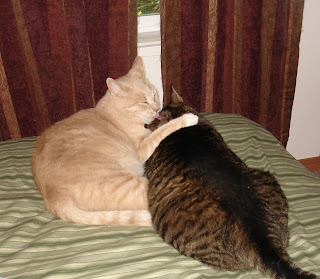 Yellow Tabby grooming Binky
For about a month we had been trying to think of a name for the yellow tabby and just couldn't think of quite the right name. We wanted to name him a name that started with a "B" since our other two cats have names that start with a "B", but nothing we could think of seemed appealing. We thought of Bubba, Buster, Buddy, and none of the names we thought of seemed to suite the cat. We just kept calling him kitty in the hopes we'd think of a name we felt was the right one.

Look at the size of Butter
the window sill is 2 feet from the floor
That weekend we were out in the garden and happened to run into our neighbors who we never, ever saw. These particular neighbors were always gone on the weekend and during the week too. As we were chatting with them over the fence, we asked them if they happened to know anyone who had lost a cat. They said, "Well we haven't seen our cat, a yellow tabby, but he is a free spirit". Our hearts sank into our feet. Gary and I gave each other a glance and we both could have cried. We said, "Well he's been over here, we didn't know he was your cat". Our neighbors said, "He's not bothering you, is he?" We said, "Ohhhh, Nooooo, he's not bothering us at all". They said they let him go wherever he wanted. They also didn't seem to worry that he was over here or the fact that they hadn't seen him at all in two months. As we parted ways we asked them, "By the way what's his name?" They said, "His name is Butter". The second they said his name I knew the cat was meant to be ours. I also knew it was the perfect name for the yellow tabby, who was a sweet gentle giant. 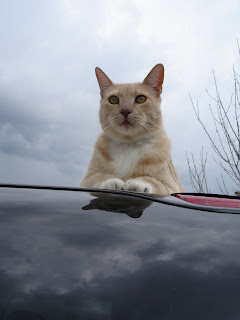 Several more months more went by and all that time we worried that Butter wasn't our cat but was really our neighbor's cat. One day the same neighbors came over and saw Butter in our yard. They called to Butter but he ran the other way. As he ran away I said to them, "I didn't mean to take your cat" and they said "That's OK, as long as he is happy that's what's important". I finally felt relieved about Butter being at our house. Butter was officially part of our family. After about six months or so Butter quit meowing with that loud and forlorn meow if he didn't see us in the yard. Butter, the yellow tabby, has been with us for three years now. Amazingly since I first saw the big yellow tabby in the garden up to this very day, he has never returned to our neighbors house, not even once. Butter, the yellow tabby, is outside all day long and has never once walked the 20 or so feet to their yard, even though he is free to do so if he chooses.
Posted by Linda Starr at 4:48 AM