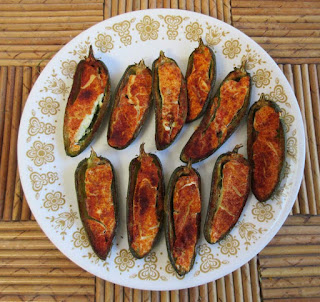 We loved baked poppers. I Slice jalapenos in half lengthwise, deseed and remove the membrane, so they aren't too spicy. Then I fill them with soft cream cheese using a table knife. Next, I sprinkled some onion and garlic powder and topped them with smoked paprika. 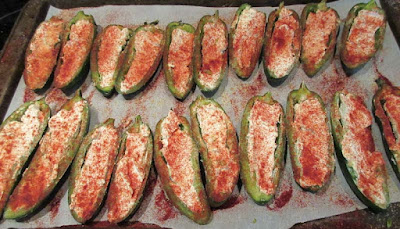 Bake in a preheated 350 F oven for 20 to 30 minutes. Watch closely so they don't burn. When eating them, in case one is too spicy, I keep a glass of milk nearby. Water does not stop the heat, but milk does help. 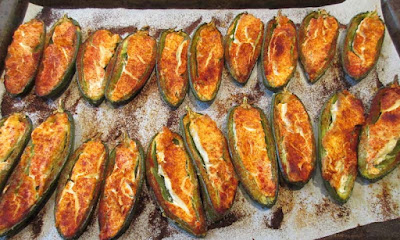 We went to a local secondhand store called the Picker's Barn. Gary spotted another well-made stuffed bear for Bonkers. Bonkers' old bear has taken quite a beating from him playing with the bear. I initially set the bear on the kitchen floor. At first Bonkers just looked at the bear, then he circled around him and then sniffed him. When I turned my back, the bear had disappeared. Bonkers had carried the bear into the bedroom. 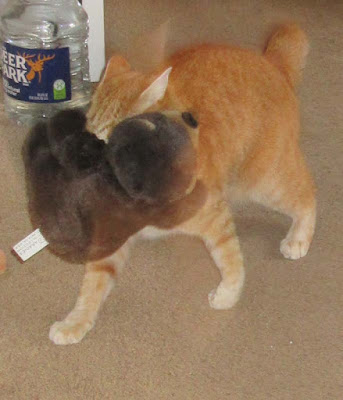 He started sniffing him some more and deciding the best approach to take to tame the bear. A little bit of a downer fact, I read that 48% of domestic abuse partners say they would not leave their situation because they couldn't take their pets. Not that I am an abused partner, but the article also said their organization was making a change to enable folks to take their pets with them. I wish I had saved the article.

The bear is quite well made and is actually made in Atlanta, according to the label. I'm going to keep my eye out for more stuffed animals for Bonkers. Today the second day, the bear is found in random places around the house. 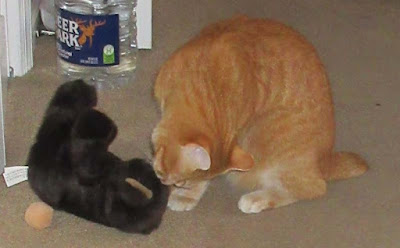 You'd think we have toddlers running around the house with all the toys strewn about. Can you tell we love our Bonkers, who we often call baby? When we walk by Bonkers, he has a one-word meow. If he comes into the room where we are, he has a soft rumble sound. If he wants some wet food, he puts one claw out and does a light scratch at my leg. He has brought so much joy to us especially during these trying times.
Posted by Linda Starr at 12:35 PM