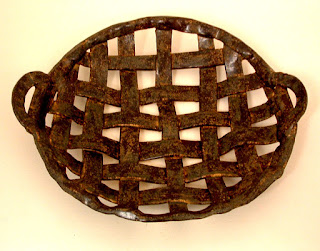 Several months ago I made this woven basket and I put it in a cabinet to dry so it wouldn't get bumped since woven pieces are very fragile. I finally got around to firing it. There's a couple of problems with these basket cases which I need to address. First if there is no foot then I can't glaze the whole bottom and the underside doesn't look that great. Second sometimes the woven pieces separate slightly in the firing where they cross. This leaves a spot of unglazed clay showing. I know how to fix the first problem but what about the separating overlapping sections, They don't seem to separate until the glaze firing. What do you think? 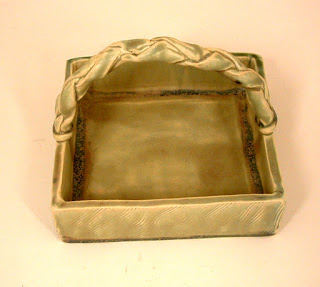 This is a small basket I made in the student class as a demo. The glaze is a fern green but it looks like it's over fired in the bottom around the inside edges which has rough little crystals. Two other pieces were glazed with the same glaze and one was fine and the other ran terribly. I fire between cone 5 and 6 and I think this glaze should only go to cone 5. I think I'll dispense with this glaze because it doesn't grab me that much anyway. Thanks for reading and for all your comments.
Posted by Linda Starr at 4:21 AM