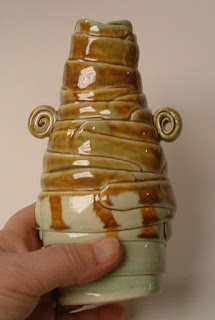 With a painting if you don't like it you can paint over it. With pottery glaze bloopers that's not always possible. This glaze experiment didn't turn out like I wanted. The two glazes didn't react as I thought. But I will put him for sale and it will probably surprise me and be the first item that sells. That happens to me a lot. How about you? 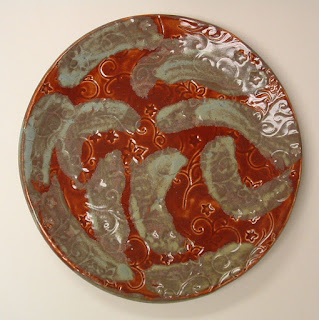 Overlapping glazes on a flat plate without much hope for movement might not be the best idea especially with a pattern on the plate. Now if I had brushed the whole plate with the second glaze it would have been ok, but I learn something each time. Not every glaze experiment is a winner. 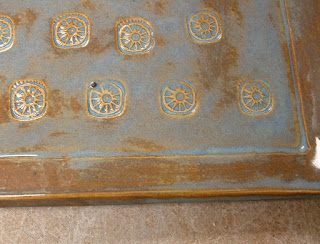 This plate has a piece of what I think is from the pyrometer - that little raised black speck. Do you think I can grind it off with my diamond bit dremmel? Luckily I have one more of these from a previous firing so I can make a set of four.

Looks like Saturday's market is going to be a rainout but we'll go anyway because we may get lucky with less rain than predicted. Thanks for reading and for all your comments.
Posted by Linda Starr at 5:16 AM