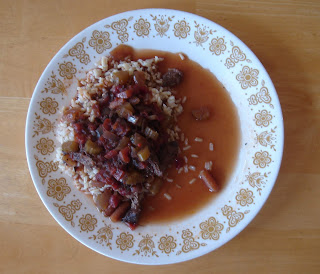 Lamb is one meat I love but it's so expensive. Why, I wonder. I suppose it's because cattle ranchers don't like sheep herders. They're in competition with one another for grazing land. But at the grocery store recently I saw that lamb shank is much less expensive than other cuts of the  lamb so I got one. I decided to cook up a stew with the shank. 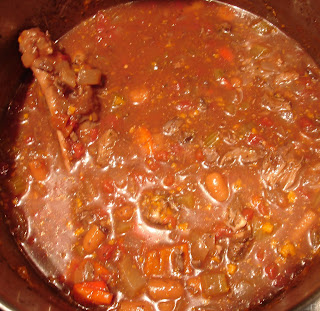 I browned the lamb shank and set it aside. Then I continued with a mirepoix of diced onion, celery and carrots added to the pan. I sauteed the vegetables till they were soft. Next I added some red wine to deglaze the pot drippings. I added one small can of whole tomatoes which I cut up. Of course I added the usual spices and herbs, salt, pepper, thyme, cloves and perhaps others you might prefer. I let the stew cook for several hours, low and slow.

The shank is a tough cut of meat therefore it needs a long time to tenderize. When the shank was falling off the bone I removed it and cut off all the meat and added it back to the stew. I was surprised at the amount of meat on one shank. I  added the shank bone back and cooked the stew for a while longer. You can see the bone protruding from the liquid. Bones add quite a bit of flavor to any soup or stew so utilize them when you have the opportunity. I served the stew over rice; it was satisfying. You could also serve the stew over pasta if you prefer. Thanks for reading and for all  your comments.
Posted by Linda Starr at 12:14 AM