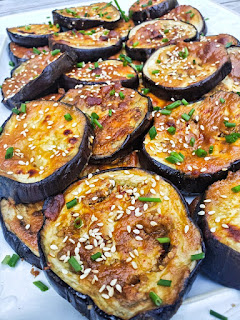 Preheat your oven to 425 F. Cut the ends off of one large or two small eggplant. Score the skins of the eggplant with a fork lengthwise, cutting deeply to pierce the skin. Cut eggplant into half inch slices. Place eggplant on a parchment lined heavy sheet pan. Brush each side of eggplant with olive oil. Finely mince three to four cloves of garlic and sprinkle on top of eggplant. Cook slices 25 to 35 minutes till they are very soft. 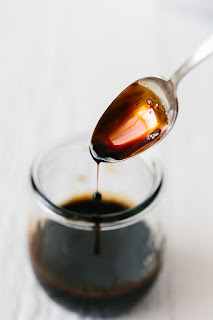 While eggplant is cooking, in a small non-reactive saucepan, heat one cup of balsamic vinegar and 1/4 cup of brown sugar. Reduce by half. When eggplant comes out of the oven, pour desired amount of the balsamic vinegar over each eggplant or serve the reduction in a small gravy boat for those enjoying to judge for themselves how much vinegar they want. Sprinkle with some sesame seeds or chives if you like. Gary doesn't like eggplant but he enjoyed this recipe. We had a chopped cucumber, dill, and sour cream salad along with the eggplant. (borrowed photos)

Be Safe, Be Well