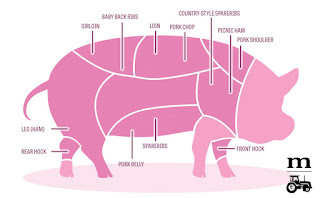 For thanksgiving I made another smoked picnic ham like last year. Last year the picnic was so delicious and not much fat. This time the picnic was full of fat with a huge bone and some very thick skin. After all the work of scoring the picnic, making the rub, putting the pineapple slices on top, baking, then pouring the maple syrup the last fifteen minutes of baking. While the picnic was cooking, I also made a pineapple sauce. Needless to say, I was disappointed. 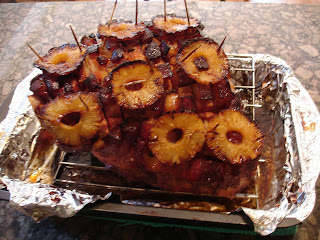 I contacted the meat processing plant and they explained a picnic is not a ham. A picnic cut is taken from the shoulder on a fatter part of the pig. The ham is taken from the rear and is much leaner. They said they raise their pigs with lots of fat so the pork chops are tender and juicy; I learned something. They offered to replace the picnic but the drive would almost equal the cost of the picnic so I declined. 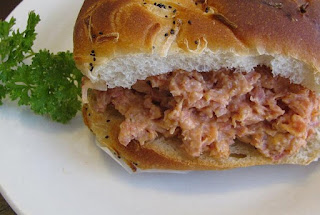 I froze the large bone to use as flavoring in a bean soup or some such later on. I froze all the fatty parts and skin to deal with later. Is there such a thing as ham broth? Hum, maybe I can make some lemonade out of lemons. Meanwhile it's a couple of days later and I still have some leftover picnic. We've been eating the leftovers and drenching them in the pineapple sauce; I must say I will make this sauce again. For some reason today, a ham salad came to mind. I've heard of ham and cheese pasta salad. Then I noticed recipes for ham spreads and deviled ham. Do you have any recipes for ham spread or deviled ham? Click source above for Lucy's Ham Spread; should I go for it?