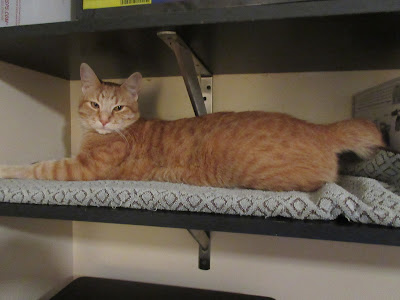 We lost our last cat Barney; it was so unexpected since he was street wise and we didn't think he would succumb to predators, but yet he did. After several months we decided to go to the shelter and get an elderly cat, one who wouldn't outlive us since we're up in years. The shelter was set up in such a way that visitors entered the kitten area first. Of course everyone loves kittens. The adult cats were in a play room. We were told the kittens didn't get to enter the play room till they were six months old.  What?!!!! How could anyone keep a kitten in a 3 x 3 foot cage for six months. We were mortified.

The shelter employee brought out each kitten and we held it. Although they were cute they didn't speak to us. There was an elderly cat in a cage nearby but it was definitely traumatized by all the commotion and the obvious lack of previous home solace. The last kitten we held was a two month old ginger manx and he was in the upper cage. He was feisty and cuddly all at the same time. When it came time to put him back in his cage he cried a forlorn cry no one could resist, especially us. We didn't make it to the adult cat room. Right then and there we knew this ginger manx kitten had chosen us. We brought him home and he showed us what the problem is with keeping a kitten in a small cage. He became a holy terror running and climbing and getting up as high as he could. We began to think we had made a mistake in getting a kitten so young, but we persevered since we'd made a promise to him.

In the photo you see Bonkers lying on the shelf above my desk area. He likes to look down on what is happening below. He'd been kept in that upper cage for two months and that vantage point was what he was used to. He kept wanting to jump up on the desk and interrupt my computer surfing. I decided to remove all the books and put a towel up there for him to lie on surveying what is happening below. Being up high seems to calm him and he has mostly settled down from his crazy days. We suspect someone else adopted him and returned him because he was so crazy running around their home. Who could blame him when he was cooped up in a tiny cage when he was so young and ready to play. Animals like humans have trauma in their lives but if you can figure out what they need to accommodate their traumatic experience they will be just fine in their new environment. We love our little boy Bonkers so much and are so very thankful he found us and we found him.