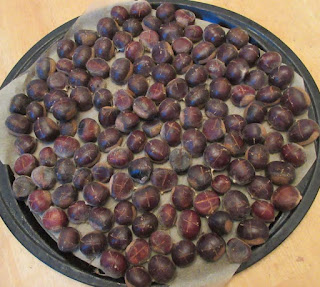 Making fresh chestnut soup is a lot of work, I won't deny it. First Gary goes to the farm to get the fresh chestnuts which was quite a distance away, that's day one. Next day I have to score each nut with a crisscross pattern. Then I roast them in the oven for about 45 minutes. Then I peel the skin off of each one. Ok that's the second day. I decide to wait till the next day to make the soup part. Peeled chestnuts go into the refrigerator. 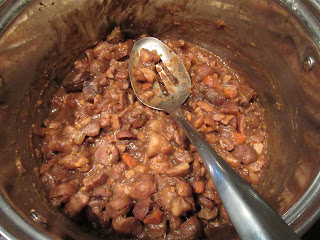 I neglected to get a photo of the peeled nuts, but you can see them in this not so appealing photo. It's day three and I sauté one chopped onion, two chopped stalks of celery, one chopped carrot in some olive oil. When vegetables are softened I add one cup of red wine and let the mixture cook for about 10 minutes. Then I add the nuts and 32 fluid ounces of vegetable stock, salt, pepper, along with fresh thyme leaves I removed from the stems. I let the soup simmer for several hours. Next I add three small chopped red potatoes and cook the soup till the potatoes are soft. But the chestnuts are still too hard to puree. Third day soup goes back in the refrigerator. 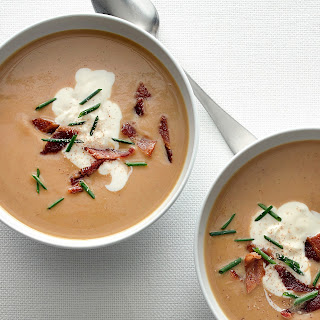 source
Day four soup goes back on the stove to cook the chestnuts a while longer till they are soft enough to not be gritty if blended. I taste one of the chestnuts, finally the chestnuts are soft enough. I let the soup cool a bit then put soup in the blender in batches till I have it all blended up. Chestnut soup is a labor of love but chestnuts are actually a nut which is really beneficial for your health. I liked the soup but Gary doesn't care for it because the wine he insisted we use is a sweet wine which tastes like blackberries. Chestnut soup should probably be a more savory soup rather than sweet. Live and learn.
Posted by Linda Starr at 7:15 PM